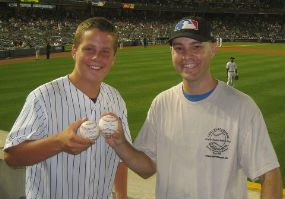 Hample shows off his Jeter ball along with another fan who snagged a Robinson Cano homer.Once a Major League player reaches 3,000 hits it becomes increasing rare to get your hands on a baseball from one of his hits. By that time in a player's career most of their hits don't reach the bleachers. Derek Jeter, however, is reaching the seats regularly this season despite his increasing age, and New York ballhawk Zack Hample managed to snag a Jeter home run last week, a home run that tallied his 3,262nd career hit. Hample had made his way to the right field bleachers for the bottom of the 9th in a close game, hoping for a shot at a Robinson Cano or Nick Swisher homer. Needless to say, when Jeter, one of his favorite players, sent an opposite field bomb sailing his way, he was ecstatic. Hample made his way down the staircase towards the front row where he was met with some serious ballhawking competition. As he watched the ball descend towards the bleachers, several other fans with gloves jockeyed for position. "There were two other fans reaching for it with their gloves, including the guy who'd caught the Cano home run," he wrote. "All of our gloves bumped, and for a split-second I didn't know whether or not I'd caught the ball. Well, somehow I *did* catch it!!! Somehow the ball found its way into MY glove, and the more I watched the highlight, the more astounded I was that it actually happened." The snag was Hample's 19th career game home run and 3rd of the season. Check out Zack Hample's home run snag on MLB.com