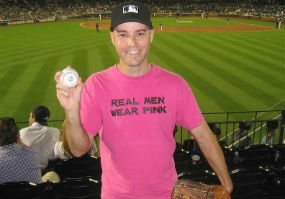 The 2012 myGameBalls.com Ballhawk of the Year, Zack HampleFor the second consecutive year and third time in the past four seasons, Zack Hample was selected by his peers as the myGameBalls.com Ballhawk of the Year. The veteran ballhawk recorded his second highest single-season total with 640 balls and also snagged six game home run balls including one off the bat of Derek Jeter. Hample received 20 first place votes, 6 second place votes, and five third place votes for a total of 77 points. Hample attended 80 games this year, down considerably from his 131 games in 2011, but his average of 8.0 balls per game was nearly identical from last year's average. Attending most of his games in New York, he recorded the second highest Average Competition Factor of his career (274,893). Coming in second place in the vote was the 2010 Ballhawk of the Year, Erik Jabs, who snagged a career-best 612 balls. Here is the full list of vote getters: