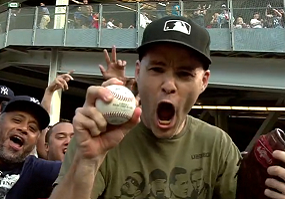 Hample goes nuts after snagging the most prized ball in his collection.In what can easily be labeled the greatest snag in myGameBalls.com history, Zack Hample snagged hit number 3,000 and home run number 668 for Yankee star Alex Rodriguez, a towering opposite field shot that sailed into Hample's section in the right field bleachers. Hample outmanuevered a crowd of agressive fans to come up with the ball, a prize that many are saying is worth six figures. Hample's snag was all over the news, including ESPN and all the major networks. Both fans and casual observers are debating what he should do with the ball, and as of this morning he hasn't yet made an official decision. The snag was Hample's 32nd lifetime game home run, 8,161st lifetime ball, and 355th ball of this season. Stay tuned to Zack Hample's blog for updates on the ARod ball