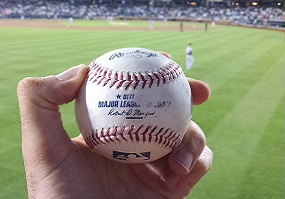 Weil snapped this photo of the Brandon Belt home run ball.Four years ago, New York ballhawk Ben Weil had his hands on what should have been his first career home run ball. Unfortunately the Kevin Youkilous gamer got violently ripped out of his hands by a maniacal fan, prompting Weil to pen a myGameBalls.com column entitled When Ballhawking Becomes Assault. The home run ball that should have been his haunted Weil for four long years, but on June 10 at Citi Field Weil finally achieved redemption. Amidst a crowded gallery of people atop the left field Party Deck, Weil snagged a home run ball off the bat of Brandon Belt, giving him his first official gamer in his 600-plus ball collection. Understandably, he was beside himself. "I felt like I was literally losing my mind," he said. "I did not know what to do, I was just running around, ansty, unable to sit down like a mad man, hugging my friends, sending emphatic, freak-out texts, just plain losing it. Other than maybe the Giants winning the Super Bowl after the 2007 season, I'm certain I've never had a greater sports-related moment in my life." Weil had antipicated getting a good opportunity at a gamer when he realized the ticket his friend gave him was on the Party Deck, but he almost missed his chance. He saw Brandon Belt, a lefty, come to bat, and decided he could take his glove off and go purchase a beer. And as his beverage was being served, he was shocked to see Belt blast an opposite field shot towards the Party Deck. "And the next, immediate thought in my head is 'I don't care that I don't have a glove, I'm going for this ball, and WILL catch it barehanded'," he said. "So, as the ball is sailing towards me, I realize I am trapped, and can't move anywhere and the ball is going to sail over my head, but with the understanding that this is a homer, and I so desperately want it, I jump anyway, hoping magically somehow I will be able to soar up to this ball." Weil leaped for the ball but came up well short. The ball smacked into the railing behind him and then caromed into the air. "It looked like it was a feather just sitting in the air, waiting to be plucked," Weil remarked. "Seeing this, I immediately jump up again, and with no competition, reach up, and grab the ball out of the air. The freak out IS ON!!!" Watch the video of Weil's first home snag on MLB.com