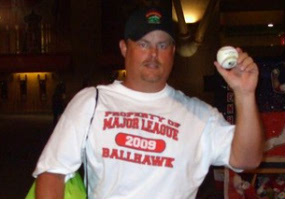 John Witt, AKA Major League Ballhawk, considers himself an old-school ballhawk, preferring not to use many of the techniques used by the younger generation of ballhawks. "I try not to BEG for balls and I can't and WON'T use DEVICES (aka Glove trick) to get baseballs," he wrote on his blog. Despite the limited tool set, Witt has snagged more baseballs over the years than just about anybody. In fact, when you factor in minor league games, he is closing in on 5000 balls caught at professional games. While he remains a few dozen short of this milestone, he recently snagged another milestone ball - number 2900 in regular season games. Since many balls in his collection are from Spring Training, Witt keeps a separate count of regular season balls and is marching towards his ultimate goal of 3000. Witt snagged #2900 last Thursday at Angel Stadium. It wasn't quite the memorable snag he was hoping for, but was significant nonetheless. "Someone from the A's hit a ball into the gap between the RF Pavilion seats and the seats down the RF line," he wrote. "I walked over and looked down to where the ball was. There were actually 2 balls sitting down there. A groundskeeper walked over and picked one of the balls up and tossed it into the seats down the RF line. He picked up the other one and tossed it in my direction. It was about a foot and a half short of getting to me and fell back down to where he was. He picked it up and tossed it to me." Witt was excited to reach the milestone, but is hoping that number 3000 is more than just a simple toss-up from a groundskeeper. With a collection of 100 game home run balls, it would be fitting if he got another one for regular season ball #3000. Read more about MLBallhawk's 2900th Regular Season ball on his blog.