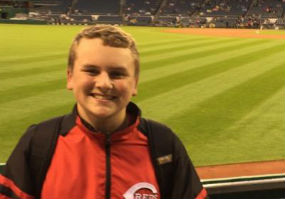 The 2015 Junior Ballhawk of the Year, Cole AdkinsCincinnati ballhawk Cole Adkins made a goal of snagging 100 baseballs this season. By season's end he had nearly doubled that goal, finishing with 185 balls enroute to being voted the 2015 Junior Ballhawk of the Year. Adkins' stats clearly separated him from the field. Among Junior ballhawks (under 18), he finished first in total balls (185), first in average balls per game (6.85), first in double-digit games (8), fifth in game balls (6), first in single-game high (16), and fourth in average competition factor (174,621). His fellow ballhawks were in overwhelming agreement that he deserved to be the Junior Ballhawk of the Year, giving him 21 first place votes. Adkins also received eight second place votes and two thrid place votes to finish the voting with 81 points, more than double the next-highest total. Coming in second place after an outstanding season was Angel Arroyo, who snagged 146 balls this season and averaged 4.87 balls per game. His 37 game balls led all junior ballhawks. Rounding out the top five were Nate Duppler who averaged an impressive 5.23 balls per game, Nick Badders who snagged his first career game home run, and the Cook family who put together another great season with 162 total balls. Here's the complete results:

Check out the Junior Ballhawk of the Year Awards show, hosted by Mateo Fischer, Larry Larson, and Alan Schuster