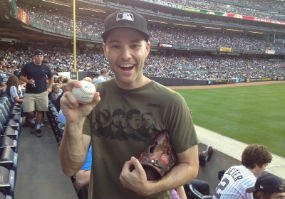 The 2015 myGameBalls.com Ballhawk of the Year, Zack Hample.Some people questioned the wisdom on Zack Hample changing his fundraising strategy this season to solicit donations on a per-game-home-run basis instead of a per-ball basis for his favorite charity Pitch In For Baseball. By season's end, those people were eating their words. Hample snagged eight game home runs this season, the most in his career, and successfully raised $1,500 for the charity. And for good measure, one of those eight snags -- ARod's 3,000th hit -- raised $150,000 by itself with a donation from the New York Yankees. So it wasn't much of a shock when Hample ran away with this season's Ballhawk of the Year Award in what will go down as one of the greatest ballhawking seasons of all time. On top of the ARod snag and seven other gamers, he also totalled 827 balls (first on MGB), attended 113 games (first), averaged 7.32 balls per game (5th), tallied 28 double-digit games (2nd), and recorded a single-game high of 23 balls (first). His lifetime total now sits at 8,633, within striking distance of 10,000. Coming in second place in the voting was last year's winner Greg Barasch, who put together another phenomenal campaign. Barasch set a new myGameBalls record by averaging an incredible 13.67 balls per game over the course of the season. He also ran his streak of games with at least five balls up to 118 games, a streak that was finally broken in a World Series game at Citi Field in which he snagged four. David Welch from Atlanta came in third place after a breakout season in which he snagged 665 balls including two game home runs. Benny Amesquita, the Los Angeles ballhawk who snagged snagged 100 batting practice balls on the fly this year, came in fourth place. Perennial ballhawking superstar Erik Jabs rounded out the top five, snagging 507 balls this year en route to his fourth consecutive season with at least 500. Here's the full results of the voting:

Check out the Ballhawk of the Year Awards show, hosted by Mateo Fischer, Larry Larson, and Alan Schuster