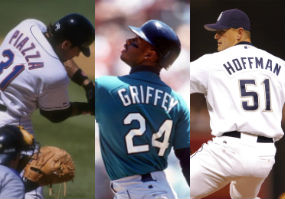 And to make it crazier, Ken Griffey Jr. was the first ever unanimous choice! Wait. Didn't the writers come out and announce that Ken Griffey, Jr. and Mike Piazza made the list, with Griffey receiving a record 99.3% of the vote? Yes, but that doesn't matter. What the people really wanted to know was "who do the crazy people that show up to the stadium hours before gates in hopes of pocketing baseballs think should get a bronze statue?" That's correct, you, the baseball FANATICS (the craziest of the crazies), have voted in the inaugural MyGameBalls Hall of Fame ballot and chosen the three men listed above as your class of 2016. The official results are as follows: If we were to follow similar rules as the BBWAA, those receiving 5% or less of the votes would be eliminated. Since we only had 16 votes and that means 1 vote is already more than 5%, I chose to have the cut-off at less than 2 votes (12.5%). That is great news for Jason Kendall and everyone north of the border -- my condolences to the coach Brad Ausmus and the rest of the "1 vote and unders". So what do you think? Did we get it right? Who got snubbed and who got more support than what they deserve? I'll point you over to a few of our member's blogs to reveal their ballot, hopefully next year you decide to do the same (and participate in the 2017 voting).