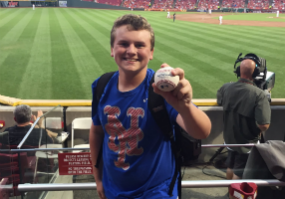 The 2016 Junior Ballhawk of the Year, Cole Adkins.Cincinnati ballhawk Cole Adkins continued his domination of the Junior Circuit this year and became the first ever repeat winner of the Junior Ballhawk of the Year award. Adkins put up monster numbers all season long and finished with the third highest average (8.42 balls per game) on the entire site. Adkins finished the year with 303 balls, far eclipsing his 185 ball total from last season. He also set a personal high by snagging 20 balls in a single game on August 17 at Great American Ballpark. Most notably, he snagged his first career game home run on September 6 on a Jose Reyes homer. Adkins was the decisive winner in the voting, followed by Ryan Feuerstein (398 balls), Gehrig Frei (118 balls), Angel Arroyo (191 balls), Ted Lebon (74 balls), and Eric Abneri (41 balls). Here's the complete list of vote-getters: