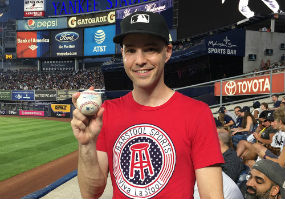 The 2016 Ballhawk of the Year, Zack Hample.Zack Hample was named the myGameBalls.com Ballhawk of the Year for the second straight season, and that's no surprise when you look at his stats. In fact, his 2016 stats were practically a mirror image of his 2015 stats. Hample snagged 842 balls in 111 games this year for an average of 7.59 balls per game, barely moving at all from last season's numbers of 827 balls, 113 games, and a 7.32 average. And after setting a career high with 8 game home run balls in 2015, he topped that in 2016 with 11. Hample snagged 6 of those 11 gamers on the fly, and he was particularly prolific at Yankee Stadium, where he snagged 7 homers from his go-to spot in right field. Erik Jabs had another outstanding season with 803 balls to finish second in the voting, followed by Miami's Dennis Mora (639 balls), Atlanta's David Welch (510 balls), and New York's Greg Barasch (202 balls with an average of over 10) Here's the complete list of vote-getters: