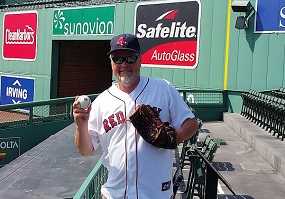 The 2017 Senior Ballhawk of the Year, Doug HakeyMost people tend to take it easy during retirement. Not so for 58 year old ballhawk Doug Hakey. Hakey spent the 2017 baseball season running around ballparks up and down the east coast, racking up 226 baseballs over the course of 48 games en route to becoming the myGameBalls.com Senior Ballhawk of the Year. Hakey was most prolific at Nationals Park where he snagged 117 balls, but he also snagged a sizeable portion at Camden Yards (63) and Tropicana Field (23). Hakey also snagged balls at Fenway Park (8), Progressive Field (8), Sun Trust Park (3), Citizens Bank Park (2), and Wrigley Field (2). In addition to Hakey's solid 4.71 balls per game average, he also snagged four game home run balls including his first ever on-the-fly home run snag on a Randan Grichuk homer at Nationals Park. Hakey snagged at least one ball in all 48 games this year to extend his consecutive game streak to 321 games. His game high was 15 balls on June 2 at Camden Yards. His lifetime total now sits at 1,547. Coming in second place in the vote was last year's winner Devin Trone, who compiled another strong season with 303 balls. Coming in third was Rocco Sinisi who finished the year with 124 balls. Here's the full list of vote-getters for Senior Ballhawk of the Year honors: