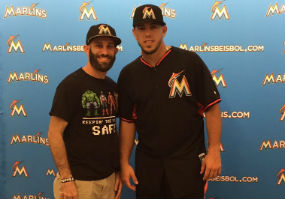 The 2017 Ballhawk of the Year, Dennis Mora, pictured here with Jose Fernandez.Regulars at Marlins Park have grown accustomed to seeing three things beyond the outfield fences -- The Clevelander in left, the Ugly Sculpure Thingy in center, and Dennis "The Beard" Mora pretty much everywhere. Mora, a 31 year-old ballhawk from Miami, hauled in a total of 846 balls this season en route to being voted the 2017 Ballhawk of the Year. Mora's dominant stats were mostly compiled at Marlins Park (722), but he also snagged balls at Tropicana Field (65), Sun Trust Park (24), Fenway Park (9), Dodger Stadium (8), Citi Field (6), Camden Yards (6), Coors Field (4), and Yankee Stadium (2). Mora finished first among all ballhawks in Total Balls (846), Average Balls Per Game (9.84), Game Home Runs (11), and Single Game High (29). For his career, he is only 60 balls away from becoming just the 9th ballhawk to reach 2,000 balls. Mora was the clear favorite of voters, finishing with 27 first place votes. Zack Hample (688 balls) picked up 3 first place votes and 13 second place votes after another outstanding season, followed by Erik Jabs (671 balls) and Tony Voda (252 balls) who tied for third place. Here's the full list of vote-getters: