Trone Voted 2018 Senior Ballhawk of the Year
Los Angeles Ballhawk Has Best Year Ever With 338 Balls Including 146 On The Fly
by Alan Schuster, November 23, 2018 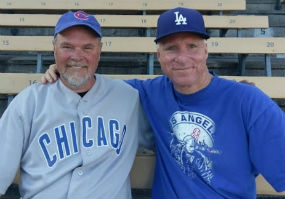 The 2018 Senior Ballhawk of the Year Devin Trone (right) along with fellow ballhawk Doug Hakey.Devin Trone keeps getting better with age. The 58 year old Los Angeles ballhawk snagged a career best 338 balls this season en route to being voted the 2018 Senior Ballhawk of the Year. Trone won the award for the second time, having won it in 2016 when it was first introduced as an award category. A close look at Trone's stats reveal a ballhawk committed to shunning toss-ups in favor of balls caught on the fly. 260 of his snags this year were hit (77%), and 146 were caught on the fly (43%). Interestingly, of the 128 games he attended, he never recorded a double-digit game and actually got shut out 17 times. "Try that and still end up in the Top 10," he remarked. It was a memorable year in many ways for Trone. He visited Washington D.C., San Diego, Seattle, and Phoenix along with his home ballparks in L.A. and Anaheim. His personal highlights of the year were snagging a Jesus Aguilar homer in the Home Run Derby while wearing a myGameBalls.com t-shirt, and snagging a Nick Williams home run ball at Chase Field. For his career, Trone has now snagged 2,379 balls, almost all of which were snagged over the age of 50. Coming in second place in the voting was last year's winner Doug Hakey who had another steller year with 208 balls. The third place winner was MGB newcomer Keith Hupp who snagged an incredible 14 game home run balls this year. Following Hupp were Great American Ballpark regulars Greg Jeranek and Rocco Sinisi. Here's the full list of vote-getters: