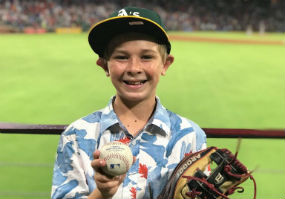 The 2018 Junior Ballhawk of the Year, Donovan Farrell.In a fitting end to the best ballhawking season a 12 year old could possibly have, Los Angeles ballhawk Donovan Farrell was voted the 2018 Junior Ballhawk of the Year, becoming the youngest winner of the award in its 10-year existence. Farrell's stats were impressive for a ballhawk of any age. Over 47 games at seven different ballparks, he snagged 366 balls and finished the year with an average of 7.79 balls per game. He started the year off with a bang by recording 18 balls in his second game of the season and went on to snag double-digits on 18 different occasions. Most memorably, Farrell snagged five game home run balls including a clean catch of a Manny Machado homer in a playoff game at Dodger Stadium. The snag landed him a chance to meet Machado after the game and get the ball signed. Incredibly, three weeks later Farrell snagged two home run balls in a single World Series game, one from Mookie Betts and the other from Steve Pearce. Coming in second place in the voting was 16 year old Kelsey Bobby who teamed up with her father to snag 651 balls, followed by last year's winner Eric Abneri who had another solid year with 140 balls. Here's the complete list of vote getters: