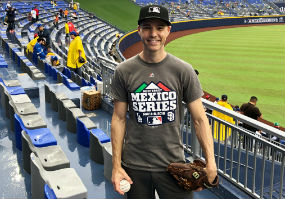 The 2018 Ballhawk of the Year, Zack Hample.Eclipsing 500 balls for the eighth consecutive season and tying his career-best 11 game home run balls, Zack Hample was voted the 2018 Ballhawk of the Year by the myGameBalls.com community. It was his sixth Ballhawk of the Year title in the website's 10 year history. Hample attended 85 games this season, hitting double digits 14 times and averaging 5.96 balls per game. The highlight of his season came on May 1 at Great American Ballpark where he snagged 24 balls including three game home runs. The last of his three gamers was Alex Blandino's first Major League homer. Coming in second place was Erik Jabs who had another strong season with 516 balls. Following Jabs was the father-daughter team "Kelsey Bobby" who finished the year with 651 balls, an average of 10.17 balls per game. Here's the full list of vote-getters: