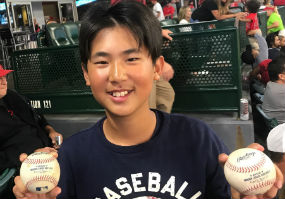 The 2019 Junior Ballhawk of the Year, Jaiden ChoeTwelve year old Jaiden Choe of Southern California had the best season on record of any junior ballhawk in 2019! His 445 baseballs snagged during the 2019 season, his second as a ballhawk, landed him third place overall on mygameballs. His total of 668 career baseballs in just two seasons is an incredible feat considering he is still at least 4 years away from obtaining his driver's license! Coming to the ball park early, Jaiden is well prepared with multiple uniforms and hats. He is an expert at gathering information on his smart phone. His knowledge of baseball, the players and their habits, along with a polite and confident demeanor make him a favorite among players, fans, fellow ballhawks and stadium employees alike. Although he is a master at catching toss ups and third out balls, Jaiden can make a play in the stands. His most memorable game of the 2019 season was catching foul balls from both Andrelton Simmons and David Fletcher on September 26. His favorite ball of the year was a home run off the bat of Jesus Aguilar. This was Aguilar's 11th home run of the season and 62nd of his career. Jaiden also scored 4 line-up cards and 2 batting gloves in 2019. His collection also includes game bats from Shin-Soo Choo and D.J. LeMahieu that he snagged in 2018. Jaiden looks forward to the 2020 season and sets a goal of averaging at least 5 balls a game. He is quick to credit some of the senior Los Angeles ballhawks for assisting and encouraging him throughout his young ballhawk career. A very special thanks go to his parents for all of their support in his quest for ballhawk greatness. His dad Danny wields a pretty slick glove himself! Congratulations Jaiden and best of luck in 2020! Here's the final vote totals for Junior Ballhawk of the Year: