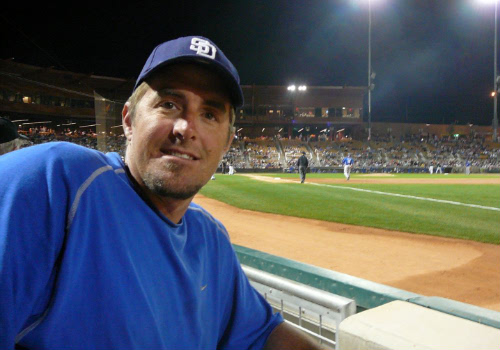 Andruski snagged the foul ball from this section at Camelback Ranch Field.On Monday Mark Andruski began his vacation in Arizona, and from a baseball perspective he was determined to get his money's worth. And he did just that, hitting up 3 different spring training games in the same day, snagging balls at each, and capping it off with a foul ball at day's end. His day started at 10:30 AM when he and a friend showed up at Goodyear Ballpark for the Reds/Indians game. He snagged 2 balls during BP and left in the 7th inning to head up to Surprise to attend batting practice before the Giants/Rangers game. He snagged 4 more balls there but didn't stay for the game and instead drove over to Camelback Ranch Field for the 7:00 Royals/White Sox game, arriving just in time to snag a ball in right field at the end of BP. At that point Andruski had snagged 7 balls at 3 different complexes, and as the game wore on the temperature dropped and his friend was begging to leave. But Andruski, hoping for a ball to be hit into their sparsely populated section deep down the first base line, insisted that they stay. And in the eighth inning, sure enough, he got his wish. Brayan Pena fouled one off right in their direction, and Andruski was ready to pounce on it. "Obviously I was sitting on the aisle to get a better jump on the ball and more room to move," he said. "I went up about 4 steps on the aisle, heard some big dude breathing down my neck so I kind of had to keep him boxed out and use 2 hands on the catch with the glove because he gave me a good little shove trying to get through me to the ball." It was his first game ball of the season, but he had little time to savor the moment. "I snagged it and my buddy immediately says 'OK you got your foul ball now lets get out of here, its freezing'. So we split." Andruski finished out his Arizona trip with a couple more games and then made the drive back to the San Diego area, feeling good about his pre-season performance. In 2010 he plans to attend about 20 games at PETCO Park and hopes to add to his collection of 5 game home run balls. "I'm hoping to get more home run balls this year," he said. "I caught one last year from Will Venable and the cool thing is it has made all of the season highlight videos that the Padres have put out. The catch was even up on Padres.com when they had a small video clip interviewing Will Venable about the season coming up and his new found power to left center." His 5 career game home runs are the 5th highest on myGameBalls.com, and his total count of 474 balls is good for 9th place on the all-time leaderboard. Look for him to put up big numbers again this year in San Diego. Check out Mark Andruski's complete collection on his Member Page.