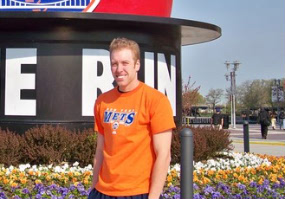 Jabs, shown here in front of the home run apple outside Citi Field, joins an elite group of ballhawks with a triple-digit consecutive games streak.Wednesday, August 13th 2008 was a depressing day for Pittsburgh ballhawk Erik Jabs. Attending the Pirates/Reds game at PNC Park, he failed to snag a single baseball. It was a crushing blow to his ego, but he picked himself up and came right back to the ballpark two days later on the 15th. He snagged two BP balls that day, starting a consecutive games streak that continues even to this day. On Sunday at Citi Field, just a year and a half since the streak began, Jabs successfully ran his streak up to triple digits, reaching his 100th consecutive game with at least one ball snagged. Heading into the game sitting on 99 consecutive games, some might say it was a risky move to go for his 100th at Citi Field. He had never been there before, and it was a weekend game at a park that is typically fairly crowded. Not to mention it was a Sunday afternoon game, which meant there might not be batting practice. Luckily for him, batting practice did indeed take place, and since he had a season ticket he was allowed in the stadium 30 minutes before the general public. But he wasn't able to capitalize on those advantages and was shut out for the first 45 minutes. Finally, Jason Bay sent a home run ball sailing in his direction, and Jabs snagged it on the fly to record his first ball of the game, sealing the 100 game streak. "When I inspected the ball, it was a gem, not a scratch on it," he wrote on his blog. "Additionally, it was a Citi Field commemorative ball, which had avoided me all of last year. It made the whole weekend trip worth it." He finished the game with 5 balls, running his lifetime total up to 595 balls. 468 of those balls have come during his 100 game streak. Currently 8th on the all-time leaderboard, Jabs is planning to attend 80-90 games this season and hopefully climb his way towards the top. Read Erik Jabs' full report on his 100th consecutive game on his blog.