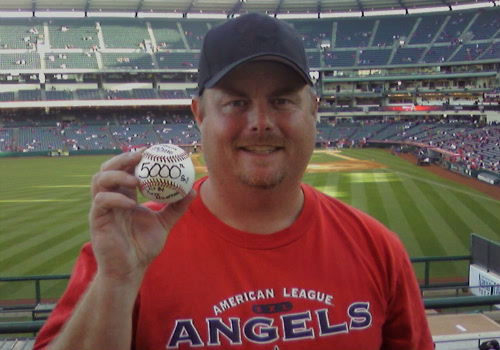 In the bleachers at Angel Stadium, MLBallhawk John Witt shows off his 5,000th career baseball.When it comes to ballhawking, John Witt is a veteran in every sense of the word. When Witt snagged his first baseball in 1977, a lot of the myGameBalls.com members were not even born yet. Now, 34 years later, The MLBallhawk John Witt is known throughout the country for his ballhawking prowess and awe-inspiring collection of baseballs. When you factor in Minor League games, Witt snagged his 5000th career baseball last night. Yes, that's right. Adding up his MLB balls (2,933), MLB Spring Training balls (924), and Minor League balls (1143), midway through BP at Angel stadium last night his combined total sat at exactly 5,000. And just for fun, he added a couple more, running the total up to 5,002. "This is my 34th season of 'Ballhawking' and it has taken a long time to get to this point," he wrote on his blog. "As ridiculous as it sounds it is something that I am actually proud of! I know that people will take that, make fun of it and twist it in all different directions but I don't really care!" The milestone baseball came on a ball hit from a fan-favorite in L.A., Torii Hunter. The ball was sliced down the right field line, took two bounces, cleared the fence, and landed right in the mitt of The MLBallhawk. Witt took out a pen and proudly marked number 5,000. "When people around me saw me writing on the ball they asked what it was, when I told them some were amazed, some were mad and some laughed and said 'yeah right!'" This was indeed a huge milestone for Witt, who's definitely had his share of milestone moments during his 34-year career. He has snagged several big home run balls, including Sammy Sosa's 61st during his historic 1998 season. Just last year, he snagged his 100th career game home run. But in terms of sheer numbers, snagging 5,000 baseballs is a feat of historic proportions. "It was a pretty incredible feeling," he wrote. "I actually got goosebumps! That sounds silly because every other ball is just another baseball but this one was special!" Even when you subtract his gigantic Minor League collection, Witt's total still stands at 3,859, second place on the all-time leaderboard. He has his sights set on 4,000, which is clearly within reach, if not this season then definitely next season. Read John Witt's full report on his 5,000th career ball on his blog