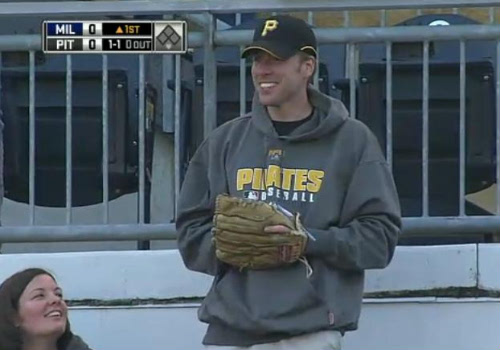 Fans watching on TV could see Jabs' foul ball snag and subsequent celebration.In what he described as "probably the best ballhawking performance of my career", Erik Jabs was a snagging machine on Wednesday night in Pittsburgh. He showed up late to batting practice but still managed to pull in 10 BP balls, and then capped it off by snagging two foul balls during the game. Jabs' big day earned him some face time both on the game's television broadcast and on the stadium's jumbotron. Despite his late entrance, Jabs quickly caught fire during BP, ranging throughout the sparsely-populated PNC Park bleachers to grab 7 home run balls. He added a glove trick, one more homer, and a Trevor Hoffman toss-up to finish BP with double digits. Having snagged 12 balls the day before, Jabs was thrilled with adding 22 balls to his BHL-leading total. He settled in to watch the game, but put his glove on just in case more luck would come his way. Sure enough, on just the second pitch of the game, Richie Weeks sliced a foul ball right at him. "I immediately stood up and went into ballhawk mode," he wrote on his blog. "I took several steps to my left and made the clean catch on the fly. It was my first foul ball since snagging my first last year on September 23, 2009." He took a moment to celebrate his catch, and it attracted the attention of the TV cameras. They zoomed in for a close-up, and as they filmed Jabs for a few seconds the announcers made a few comments on the snag. Some of the Pirates' staff also took notice and took the opportunity to make Jabs a contestant on the "Know Your Buccos" contest, which played out on the jumbotron in between innings. Correctly guessing a trivia question, he came out with a $65 jacket as a prize. The day couldn't have possibly gotten even better, but it did. In the 5th inning, Andrew McCutchen hit a foul ball to almost the exact location as the first ball. "I shot up out of my chair immediately when I saw the angle the ball took off the bat," he wrote. "This time, the ball was dying on me. It didn't quite reach me, as it was about a row and a half ahead of me. I reached down and got it to hit my glove and knocked it into the row directly below me. I would liken the play to a catcher smothering a ball in the dirt. The ball came to a dead stop and I picked up my second foul ball of the day. Amazing." Having snagged just one foul ball in his entire career, Jabs had just tripled his total in a single day. In terms of total balls, his two-day total of 24 balls for Tuesday and Wednesday's games increased his season total to 51 balls. It appears that Jabs and fellow PNC ballhawk Nick Pelescak are only beginning a friendly rivalry that will last the entire year. Expect both to continue to put up huge numbers if the attendance at PNC Park continues to remain low. Read the full report of Erik Jabs' incredible night on his blog