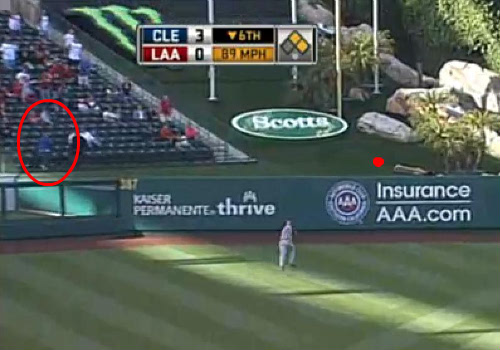 John Witt (circled in red) tracks Hunter's moonshot in the 6th inning (the small red circle shows where the ball ended up).Torii Hunter's home run last night at Angel Stadium, a towering blast to left-center, made all the highlight reels this morning. What you didn't see on Sportscenter, however, was the fan who ended up with the ball. After an usher picked it up and tossed it into the crowd, the lucky recipient was none other than the MLBallhawk himself, John Witt. Witt was hanging out in the left field bleachers when Hunter came to bat in the 6th inning. Hunter launched a bomb, and Witt ranged to his left to try to track it down. He ran out of real estate, however, and the ball landed in the grassy area in left-center where fans aren't allowed. Another fan tried to grab it, but the usher refused to let him, ordering him back to his seat. "The usher then went over and picked up the ball," Witt recounted on his blog. "After asking the bullpen if they wanted the ball back he tossed it towards the crowd. Well actually he tossed it right to me!!" It was game home run ball number 101 in his stellar 34 year ballhawking career, and first of 2010. It was his 47th home run ball snagged at Angel Stadium of Anaheim. Anticipating that some may not consider a tossed-up game home run as a true "Gamer", Witt defended his decision to count it as a gamer, posting an explanation on his blog. "No matter what the 'HAMPLEITES' say a game home run ball is a game home run ball caught no matter how you get it!!" he wrote. "Toss up, glove trick or catching it on the fly you got the Home Run that the player hit and it doesn't change the fact that it is a HOME RUN!!" "No matter how you slice it ......... It's still a game home run!!" Witt concluded. Regardless, Witt's 101 ball collection of game home runs includes very few toss ups, so it would be impressive no matter how he decided to count them. "The debate will go on and on about game balls and game home runs," he wrote. "... I have only gotten a handful of game home runs by toss up." Read the full report of John Witt's home run snag on his blog