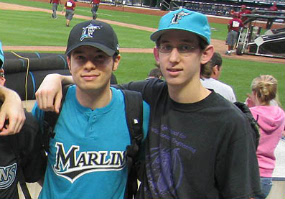 Barasch (right), shown here earlier in the year at Citi Field, is currently 5th on the All-Time Leaderboard with 901 total balls.If you followed myGameBalls.com last year you may be wondering what become of Greg Barasch, who snagged almost 300 balls during the 2009 season. Well, after finishing up his college exams, he's back. And he's ready to start trying to match last year's total. Barasch made his first big impact of 2010 on Saturday night at Camden Yards when he snagged his first foul ball of the season. It was his seventh career foul ball and his second at Camden Yards. It started as a fairly typical day - he finished batting practice with 6 balls, right on his lifetime average. During the game, he tried a little bit of everything to try to track down a game ball. "All game, I had been all over the place," he said. "and randomly I just decided to start playing the tunnels behind the plate in the top of the 7th inning." This proved to be a good decision, and Barasch didn't have to wait very long to get his first opportunity. "First batter, boom, lazy foul ball directly back to me," he said. "I literally didn't have to move. I actually got booed a little bit after I caught it because I was wearing my Indians hat at the time, but for the rest of the night people were coming up to me saying 'nice catch' and the like." The ball was actually the first of his seven career foul balls that was snagged on the fly. Beginning his snagging career in 2006, Barasch didn't snag a foul ball his first season, but he snagged at least one during the next four. Surprisingly, six out of his seven career foul balls have been snagged outside of his home city of New York. Barasch has only had a chance to attend four games so far this year, and his season total currently sits at 26. With over 900 career balls, though, look for his total to rapidly increase over the next few months. View Greg Barasch's complete collection on his Member Page