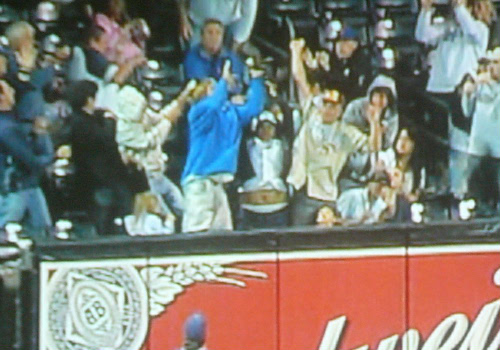 Andruski (center, blue shirt) extends above his head to secure Wright's 9th homer of the season.Mark Andruski was chatting with fellow ballhawk Leigh Barratt on Monday afternoon at PETCO Park, and Barratt had a few words of advice for Andruski as batting practice came to an end. According to Andruski, Barratt's final words to him were "Hey David Wright always hits them to your section, so be ready." It took only about 24 hours or so for that statement to be proven true. "Well it didn't happen Monday night," Andruski said. "but the very next night Leigh achieved prophet status in the world of ballhawking." Indeed, on Tuesday night the Mets' star third baseman ripped a homer right into his section in left-center field. Wright's bomb, which happened on the very first pitch of the 6th inning in a 1-0 game, was pretty tough for Andruski to judge at first. He thought it was going to sail over his head and to the left, but as he pursued it he could tell it was going to come closer than he thought. "Luckily the people who have the seats to my left and right were not there that night so I had a little room to move," he said. "I still thought it was just out of my reach so I gave it a giant leap hoping I might be able to have just enough room and to my amazement the ball stuck dead center of the glove. What a great feeling." With the snag Andruski's official count on myGameBalls.com reached 499, although he says his true count is a little bit higher due to some old snags that he didn't keep track of. "Total numbers aside I'm still pretty fired up about the catch last night," he said. "Nothing beats a game home run and seeing yourself on Sportscenter." Check out Andruski's Snag on MLB.com